I hope you enjoy this week's Chart Watch and the time you spend browsing the archives. Why not support this site's continuing development by joining our list of Patrons. Free books, free links and the undying respect of your peers are yours for the taking.

Don't Monkey With My Business

Nothing but nothing can shut down the monkey. In its third week at Number One on the Official UK Singles chart, Dance Monkey by Tones & I shimmies its way to a highest weekly chart sale to date. A colossal 9.4m streams help the single to a total chart sale of 85,000 copies - more than any single since I Don't Care clocked up 98,000 in its second week on top back in May. Tones & I tops every conceivable metric - both paid sales and streams. It is Number One and appears locked in place for a little while yet. Take note though, the track's steady climb to the top means this is already its 11th week as a Top 100 single. Meaning the ACR clock starts ticking the moment it enjoys any kind of streaming decline.

Never Go Out Of Styles

It is a point I know I've laboured on plenty of occasions in the past, but whenever the topic of a former One Direction member solo single comes up, I automatically flashback to the summer of 2010 when they all started their careers by failing X Factor auditions as those self-same solo stars. 1D were a manufactured boy band of castoffs, making it all the more enjoyable that every one of them has subsequently been pushed on us as a talent in their own right.

Niall, Liam and Louis all mill around doing their own thing, but for whatever reason, there is always special attention paid to Harry Styles. The de-facto lead singer of the group was always destined to be pimped as the major breakout star in waiting. But waiting is all we ever seem to do. Not that Harry hasn't made an impact of any kind. His debut solo single Sign Of The Times was pushed as a major superstar release and indeed famously interrupted the long-running reign of Sheeran's Shape Of You when it debuted at the top of the charts in April 2017. Yet that still remains his only chart hit of note. None of the other tracks from his self-titled debut album (released a month later) even made the Top 40. He played a worldwide tour to sell-out enraptured audiences on the back of that album for sure, but the truth remains that it is his former bandmates who between them have managed more consistent, steady careers since the group dissolved.

That's why the appearance of a brand new Harry Styles single this week was always going to be fascinating. His online army of fans is legion and noisy. But does anyone else really care? His new single is called Lights Up, and that's actually the most profound thing I've got to say about it right now. It just is. Three minutes of a lovingly constructed mid-tempo pop track which never truly seems to get going. Its most notable attribute really appears to be the video featuring a shirtless oiled up Harry in several erotic clinches which appears to do much of the job of having him come out of the closet without the messy business of announcing it. Or so the gossip-mongers would have you believe.

It is - inevitably - a massive new hit. The highest new entry of the week slams into the singles chart at Number 3. Needless to say, his biggest hit since Sign Of The Times and a bigger singles chart hit than any of his former bandmates have managed in the last two years. Treat him like a superstar and he delivers, which is why a Harry Styles single will always grab the lions' share of attention. But if this track is still Top 20 in three weeks time or perhaps even a fortnight I'll be very shocked.

Over The Cliff Edge At Last

Harry is but a small part of a pleasingly fresh-looking Top 10 as the ACR axe finally falls on a surprisingly large number of hits. In a quite unprecedented turn no fewer than five of last weeks Top 10 take a rules-enforced chart dive. Gone is Ladbroke Grove (4-26), gone is Higher Love (6-23), gone is Sorry (7-25), gone is 3 Nights (9-43) and gone is Strike A Pose (10-38). We should also note the ACR-enforced reversals too of Sam Smith's How Do You Sleep (12-39) and Lil Tecca's Ransom (14-40). Remember this is what the music industry wants to see happening, the rules are doing what they are supposed to. Where hits have exited the upper end, it makes room for new ones to arrive.

Leading the charge into the Top 10 then is - who else? - Ed Sheeran and his triumphant return to the Top 10. Proving that he alone knows the secret of mining long-available albums for easily surfaced hits, South Of The Border leaps 24-7 to reach the kind of chart heights it technically did earlier this summer only to be starred-out under the "three hits max" chart rule. It means Cardi B can now claim a fourth Top 10 hit, her first since her turn on Maroon 5's Girls Like You also reached Number 7 last year.

Jorja Smith's Be Honest is a Top 10 single at last with an 11-8 climb, after several false starts Lewis Capaldi now has a fourth Top 10 hit as Bruises accelerates 16-9 and finally, the Sam Feldt and Rani hit Post Malone jumps 13-10. That surely makes it the first Top 10 hit named in direct tribute to another active musical act since The Wanted reached Number 4 with Walks Like Rihanna in July 2013, and of course in a fun coincidence Post Malone himself is also in the upper end of the charts, Circles floating around at Number 4.

A word too for Dermot Kennedy's Outnumbered which climbs two places to Number 6. This is now the fifteenth week in a row the single has improved its chart position, a run dating back to its fourth week on the Top 100 when it climbed to Number 58 after a fortnight locked at 69. According to Alan Jones in Music Week this ensures it is the first single in chart history to climb for 15 weeks without a break. And somehow I can believe that.

Korma And Get It

New in at Number 17 is what is easily the most fascinating chart single you will hear from now until the end of the year. 47 is the debut British chart hit from Punjabi singer Sidhu Moose Wala who has spent the past two years making a name for himself in his home country with an artful blending of traditional-sounding music and hip-hop levels of attitude - to the extent of engaging in a musical rivalry with Indian rapper Karan Aujla. Hence his first-ever crossover single stirs that pot a little more - as its convoluted credits imply. 47 features vocal turns from the cream of West Midlands grime royalty - MIST, Steel Banglez and Steflon Don all take turns to give their point of view over a musical backing that is a world away from the beats n bass minimalism of their usual work but which actually represents a pleasing changing up for every single one of them. It is musical multiculturalism at its finest. Not truly bhangra but something else deliciously different. I've no idea if the appeal that has propelled 47 this far up the charts already will sustain it still further. But it is a darn sight more thrilling than the Harry track for sure.

Getting Kind Of Used To Playing It

The single topped the charts as long ago as last March, but there is just no end to the online appeal of Lewis Capaldi's Someone You Loved. Long since relegated to ACR to put a dampener on its overall chart position, the classic ballad remains enormously popular on both sides of the chart equation - at 19 on sales and 4(!) on unfiltered streams. It all means the track is back up the charts once again this week to Number 18, the highest chart position it has occupied since July 25th when it ranked 14.

No Snark, Because Sweetness

It has taken its sweet merry time but the release of its single-shot video has finally propelled Memories by Maroon 5 into the Top 40 with a 48-19 jump, this after the track has spent the past month meandering 66-61-48 in the slowest of slow climbs. Adam Levine and friends' first hit single since Girls Like You a year ago, Memories is a rather beautifully realised tribute to the group's former manager Jordan Feldstein who passed away in December 2017. And it is hard not to argue that the haunting video consisting of nothing more than the singer's face only adds to the emotion it contains. You can add Memories to the long list of songs to use Pachelbel's Canon In D as musical inspiration, the chord sequence of the classical piece having been borrowed by everyone from Coolio to Green Day in the past. The fact this took so long to properly surface is possibly something of a scandal (but Maroon 5 hits always do this) but it will be an even bigger one if this isn't Top 5 within weeks. Memories for Christmas Number One? Why the heck not?

Still The Ones To Watch

Just outside the Top 20 there are new peaks for Liar from Camila Cabello at Number 21 (this track having escaped the 31-40 dead zone after four weeks marooned there) and also Good As Hell from Lizzo at Number 22, the three-year-old track rebounding after sinking 23-26-28 over the past few weeks. Have some sympathy though for the still compelling Fuck I'm Lonely from Lauv and Anne-Marie which is well and truly stranded. The single has now enjoyed 8 weeks as a Top 40. Every single one of them spent between 32 and 36.

Sneaking in at the bottom end of the Top 40 are Meduza and Goodboys with Lose Control, the near-identikit follow-up to Piece Of Your Heart which reached Number 2 during an extended chart run back in the spring. Vocals from Becky Hill add to the mix in what is a futile attempt to change things up, this now her own second hit single of the year following Sigala's Wish You Well on which she also performed. Yes, this is Piece Of Your Heart remade. But Piece Of Your Heart was awesome and surely nobody minds hearing them do it all over again.

The Official UK Albums chart is well and truly the domain of Dad-rock at present. But that does at least mean that most beloved of British bands Elbow get to notch up a third Number One album as Giants Of All Sizes flies straight to the top. Guy Garvey and friends previously hit the summit with The Take Off And Landing Of Everything in 2014 and Little Fictions in 2017. As we march through Q4 the albums chart remains as volatile as it ever has been, this now the ninth different Number One in as many weeks. 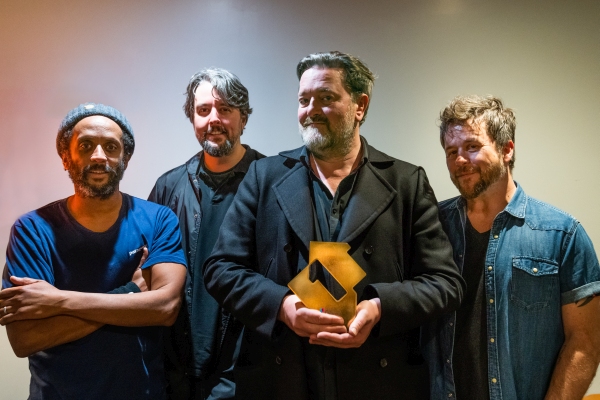 This Year's Most Read Posts